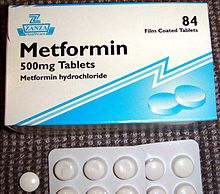 One of the major benefits of electronic health records (EHRs) is their ability to capture data in a form that can be used for clinical research. Data gathered from retrospective chart reviews tends to have a level of statistical validity that limits its use in clinical research. However, when large volumes of data is gathered from thousands of patient records its statistical validity increases significantly, in some cases approximating the value of data obtained prospectively.  In addition, this information can be gathered as secondary data at a fraction of the cost of performing traditional double-blinded clinical studies.  The dramatic rise in the use of electronic health records has created a wealth of digital data that has the potential to lead to significant advanced in scientific knowledge.

The exact mechanism whereby metformin may improve survival in patients with various forms of cancer is unknown. However, other studies have suggested that metformin may have a role in cancer treatment. Metformin is a relatively safe drug that has been used for many years. Its use has been largely limited to the diabetic population, however this study suggests it may have a role in treating cancer patients without diabetes. The researchers identified a 23% reduction in mortality in patients who are taking metformin for type II diabetes as compared to patients who do not have diabetes and who were not taking metformin. Diabetic patients were taking insulin but not metformin found a have a significantly increased mortality rate over diabetic patients taking metformin.

This study offers support for the value of electronic data for clinical research gathered during routine medical care. While data gathered from prospective clinical studies has long been considered to be the gold standard for making clinical informed decisions, retrospective gathering of data from very large numbers of clinical encounters from tens of thousands of patients may have value that approaches the value of prospective data. Central to the value of this data is its accuracy and completeness. This remains one of the most vexing challenges in healthcare. The majority of data captured by electronic health record systems is in a form that is difficult to use for secondary purposes. These challenges are related to a lack of business incentives and implemented standards, however once these barriers are overcome researchers will have access to massive amounts of data that can be used for retrospective research.

The potential for using massive quantities of data captured by EHRs for dramatic breakthroughs in clinical medicine is unprecedented. The vast majority of digital health care information has been captured in the last three years in the United States secondary to the dramatic increase in the adoption of electronic health records. Efforts that focus on getting data of high integrity from these systems will be an area of active engagement in the healthcare information technology industry for many years to come.

The full article was published by the Journal of the American Medical Informatics Association and is available here.  Multiple researchers where engaged in this study and the Reference: J Am Med Inform Assoc doi:10.1136/amiajnl-2014-002649.

The opinions represented above, unless otherwise attributed, are those of the author of this article: Michael Stearns MD.

Replace this widget content by going to Appearance / Widgets and dragging widgets into Footer Area 1.

To remove or choose the number of footer widgets, go to Appearance / Customize / Layout / Footer Widgets.

Replace this widget content by going to Appearance / Widgets and dragging widgets into Footer Area 3.

To remove or choose the number of footer widgets, go to Appearance / Customize / Layout / Footer Widgets.